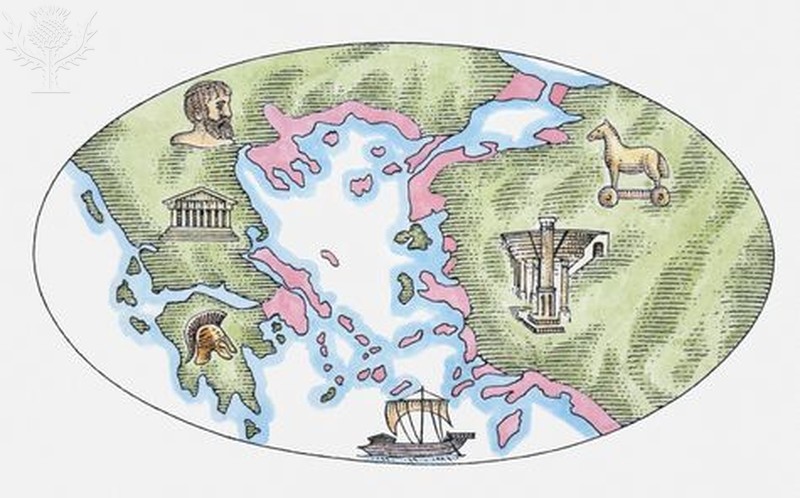 Epic poetry has been used by peoples in all parts of the world to transmit their traditions from one generation to another. The poems may deal with such topics as heroic legends, histories, religious tales, animal stories, or moral theories. The most ancient of these stories were passed from one generation to the next by storytellers long before they were written. The oral epic tradition continued for as long as the people of a nation were largely unable to read and write.

The purpose of the epic was to educate and inspire one generation of people to value and follow the deeds of their larger-than-life predecessors. It was hoped thereby that the present generation would live up to the best of its traditions.

Greek civilization began sometime after 3000 bc on the island of Crete. Crete lies south of Greece, on the southern border of the Aegean Sea. This first civilization is called the Minoan civilization.

In the 1500s bc Greek-speaking people developed another civilization on the Greek mainland. This civilization was called the Mycenaean civilization. The Mycenaeans conquered the Minoan capital between 1500 and 1400 bc. In about 1200 bcthey probably fought a war against Troy, a city in Asia Minor (modern Turkey). Many Greek legends tell of this war, called the Trojan War. Two great poems from ancient Greece tell of Mycenaean times. The poems, the Iliad and the Odyssey, were said to be the works of a man named Homer.

See table: Some figures in ancient Greek and Roman mythology

The myths of ancient Greece are similar to those of many other cultures. They tell how the world was created and help explain why things happen.